Because I kept changing the ice on my legs at night, I couldn't sleep soundly. I woke up early on April 27, took some pictures out of the window in front of the morning light, and rushed down to the restaurant on the second floor to have a meal. Li Zun hotel in Kaohsiung is a four-star hotel. The restaurant service is very standard. The waiter will lead the customers to the designated table, open the location card, and you can safely choose and enjoy the buffet in the morning. 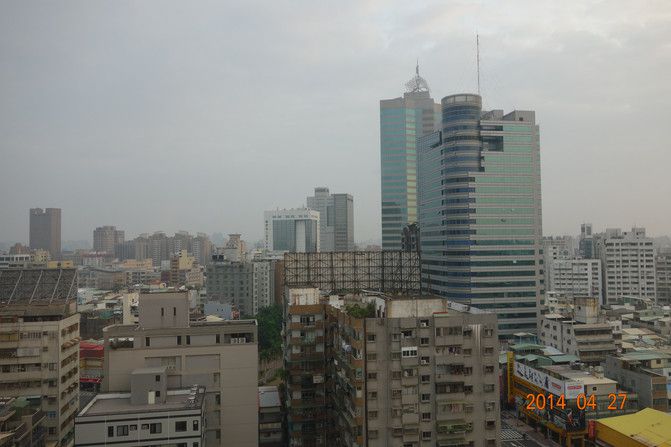 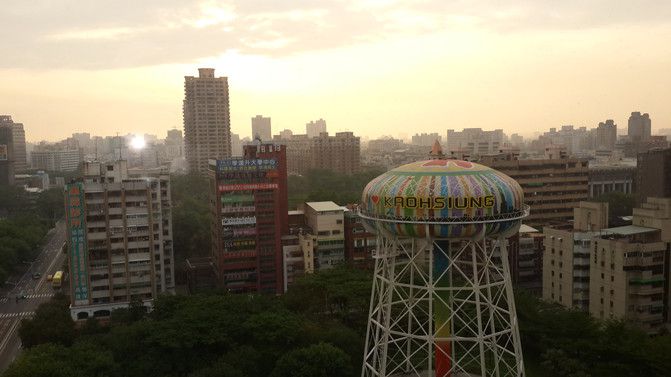 The car that had been with us for a few days was sent to repair the scratch on the 24th. The tour group changed a new bus and driver. The seat space of this bus is not as spacious as that of the original car, but there are two more rows of seats. We can basically take two seats for one person. The drivers of Taiwan tourist buses are very responsible and hard-working. Every day when they travel and come back, they help us to load and unload our luggage. This kind of service spirit is not seen in China. Therefore, while welcoming the new drivers, the group members also miss the former drivers.

At 7:30 in the morning, we set out for the Alishan scenic spot. It takes more than three hours to drive from Kaohsiung to Alishan. Reach the touchdown bridge at about 9:15. There are Tianchang bridge and Dijiu bridge built by Japanese in 1937 and Longyin temple built in 1991. In Xiaojuan's introduction, Dijiu bridge and Longyin Temple flash by. But we can see that there are many visitors here. 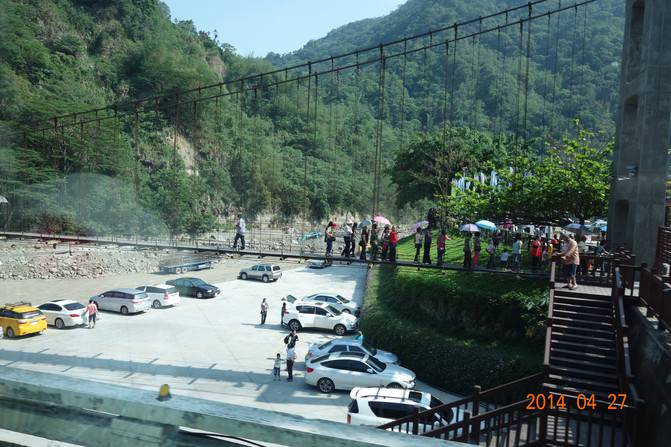 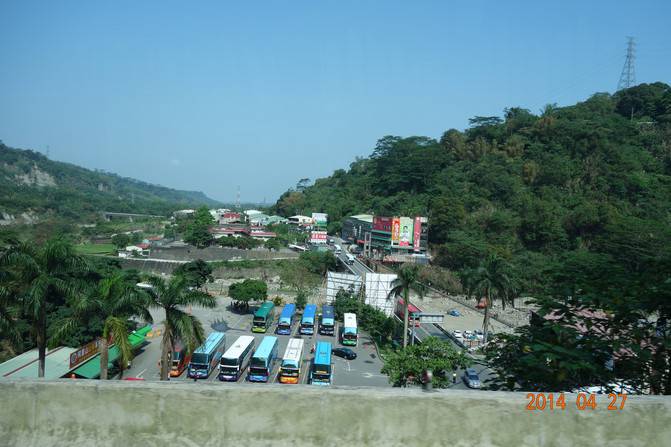 When you enter the mountain area, you can see many peaks and ravines. There are not only the precipices and cliffs, but also the beautiful valleys and waterfalls. As the mountains get higher and higher, the road becomes more and more dangerous. There are many curves in the mountains. The single track mountain road is most afraid of cars coming from the opposite side. Fortunately, it didn't run into them. At first, the roadside trees were eucalyptus, coconut and betel nut trees. Here, betel nut trees are the best. The betel nut trees are tall and straight, like a green umbrella; Walking around, it becomes evergreen camphor, Phoebe and other subtropical broad-leaved trees; Further up the road, you can see the tea mountain, and the tea factories on the side of the road are next to each other. Xiaojuan said that one of the basic elements of good tea quality in Taiwan is that in the high mountain climate, the tea mountain is often shrouded in clouds. Before she finished her words, she saw a cloud rising from the tea mountain. Alishan is really amazing. 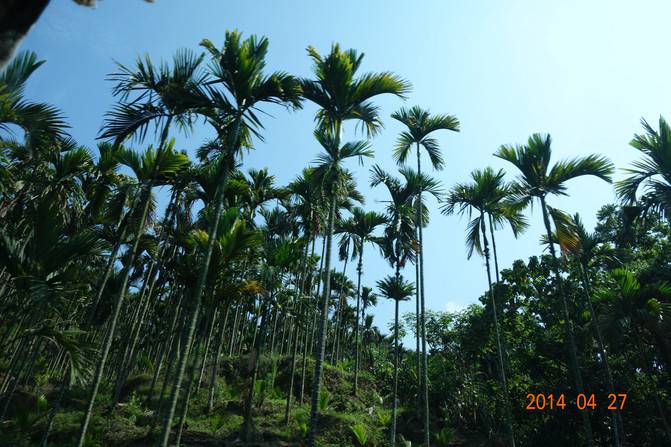 Like all scenic spots, the exit of the tourist service center of Alishan scenic spot must also pass through a local specialty sales area. Coincidentally, Lao Ma found a folding crutch at a stall, so he did not hesitate to buy one for me. This crutch later played a great role in the journey, and it was a meaningful souvenir.

From the passenger service center, you can see Alishan railway station. Alishan railway is as famous as sunrise, sea of clouds, sunset and forest, which is called "five wonders of Alishan". Starting from the foot of the mountain, the train ascended the peak in a zigzag shape, circled up the "spiral ladder", and drilled a tunnel around the mountain and across the valley, rising from an altitude of 30 meters to 2450 meters, with a gradient rarely seen in the world. It's a wonder.

Through the railway bridge, along with the mountain side highway, there is a wooden stack Road bridge built among the dense woods. It goes through the Alishan Hotel and the workstation to the Xianglin arch bridge. Walking on the wooden stack Road Bridge, you can enjoy the vigorous and straight trees of Jisong and cypress, enjoying the fresh air. It's really very comfortable.

Above the three generations of wood scenic area is Xianglin primary school, the highest school in Taiwan. Due to the continuous flow of tourists, we can't take independent scenes, so we have to take a random photo.

After Xianglin school, there are Shenyi bridge, No.28 giant wood, giant Wood Group plank road and Xianglin Shenmu scenic area. My legs are not good, and I don't want to walk more. I just sit on the stone platform outside Shenyi bridge and have a rest. There are a lot of tourists coming to Chengyi. Looking at the "Xianglin Shenmu" on the opposite side, it seems that there is a spirit in general. I can see a mist rising on the crown of the tree. After a while, it covers most of the trunk, sometimes thick and sometimes thin.

On the left side of "Xianglin Shenmu" are Jinggong stele, tree pagoda and thousand year old juniper. It looks like a metal plate covered with orange moss inlaid in the stone pagoda, with the word "tree pagoda" written on it. It is said that when the Japanese cut down a large number of sacred trees in Mt. Ali, many loggers died of strange diseases, and even cooked red rice with white rice. The Japanese believed that tree spirits were worshipped and towers were built for sacrifice. Under the tower, there are six bases, each of which represents 500 years. From this, we can imagine how spectacular the original state of the giant trees in Alishan was.

After arriving at Ciyun Temple, passing Alishan Museum, we turn back to Xianglin arch bridge. Tourists line up here and wait for the scenic spot bus to return to the service center; Unwilling to wait, several young people followed Cai Dao down the mountain on foot. Finally, we arrived at the "Yushan restaurant" at the gate of the scenic spot almost at the same time, which proved that Xiaojuan was right.

After lunch, it was already 1:30 at noon. Clouds began to appear on the mountain tops around Alishan scenic spot, and the buses of the tour group left the scenic spot one by one. We asked if we could take some Alishan tea back. After two rounds of discussion, the group members who want to bring tea and those who don't plan to bring tea finally reach an agreement to go to the tea mountain.

After walking in the mountains for nearly 50 minutes, I came to a place with beautiful scenery. When I got off the bus, I found that it was the Zou culture tribe in Alishan. It seems that the tribe people and director Cai are more familiar with each other. After a simple welcome ceremony, everyone scattered to explore the treasure of the tribe. Lao Ma and I went straight to the tea mountain behind us. Before we went out, we studied the tourist sites and learned about the Zou culture tribe in Alishan, where Taiwan's high mountain tea is produced. We wanted to make an on-the-spot investigation to avoid buying back the fake tea. We didn't expect to come here by mistake this time. It's a wish of heaven and man!

After tasting three courses of tea in the tribal tea house, several members of the group all believed that the high mountain tea here was really good tea. It was mellow and sweet. We bought a few boxes of "green heart Oolong" and left. It was a full return.

Back on the bus, Xiao Juan said that the driver thought the waiting time was too long. He looked at his watch and stayed here for nearly an hour and a half. He had to get to Taichung, more than 140 kilometers away. It's strange that the driver didn't have any opinions.

The car ran for more than two and a half hours and arrived at Fuxing North 1st Street at 6:20 p.m. After getting off the bus, Xiaojuan leads us to Fengjia night market along Fuxing street.

At McDonald's at Fengjia intersection, set a meeting time, and everyone will find their own way. I walked along Fengjia road with my walking stick and my old horse to the stone tablet of Fengjia University. Fengjia university is close to Huahua road in Taiwan. It's crowded. No wonder it's the most crowded night market in Taiwan. As the crowd turned to Wenhua Road, Xiaojuan repeatedly introduced everything from large intestine to small intestine, a mouthful of fried dumplings, octopus balls and Keli cakes. There was a long line in front of the famous food vendors. We usually had a bad stomach. We didn't patronize the night market stalls, and we didn't find anything to eat after a long circle, Finally, hungry from the park big brother fried chicken that street out of Fengjia night market. 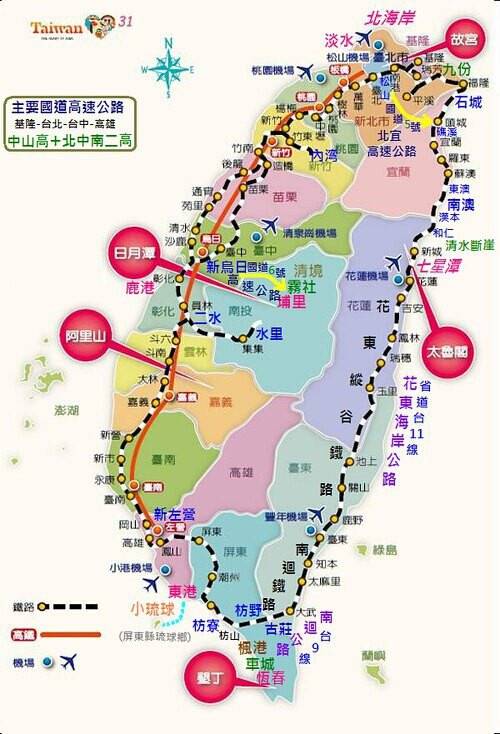 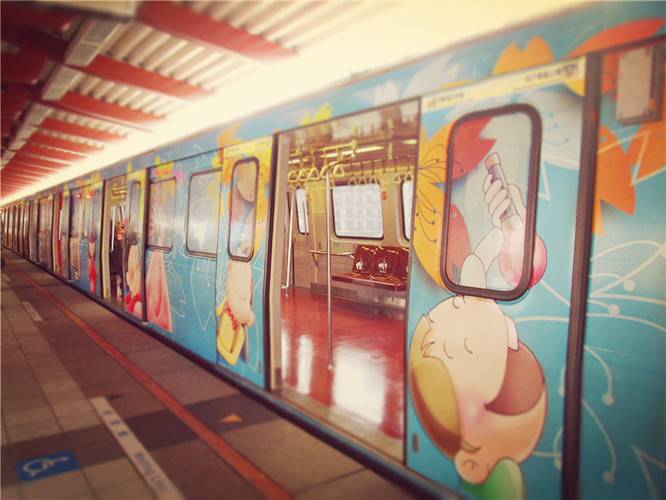